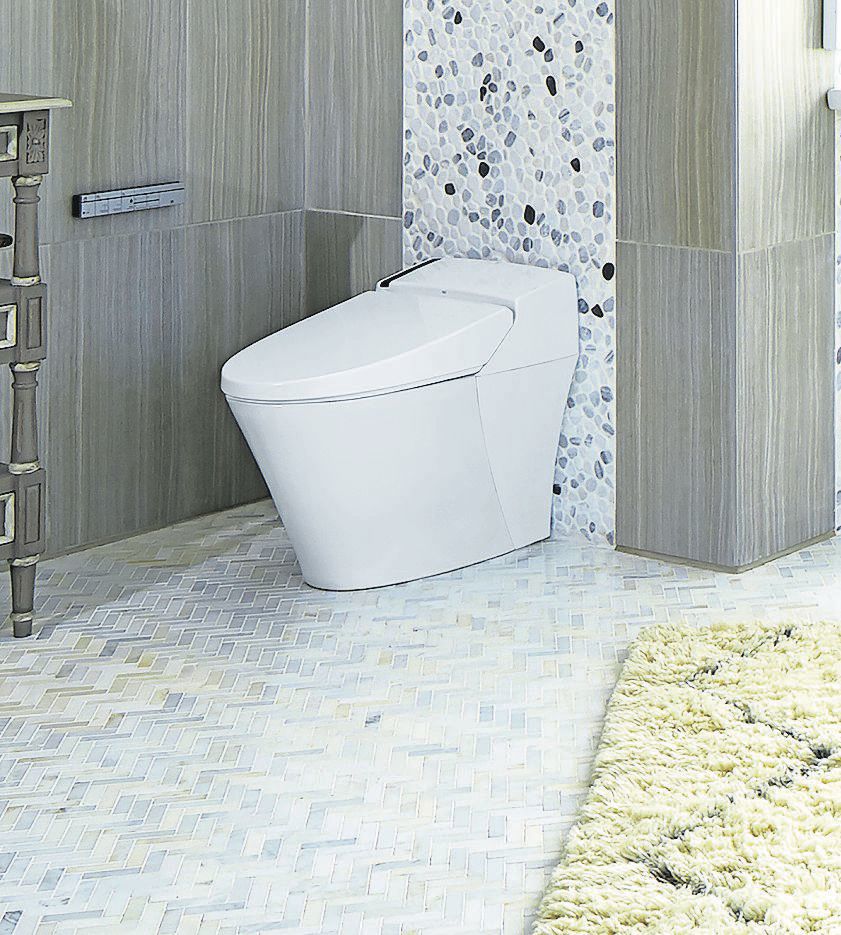 Your toilet is outdated. Modern, high-tech toilets with bidet features are beginning to catch on in America.

“Once a new user has had the opportunity to try out a smart toilet, it is hard not to appreciate its many benefits,” said Jean-Jacques L’Henaff, vice president of design, LIXIL Americas, comprised of American Standard and DXV.

Worldwide, the Japanese company Toto is king of the market, with 40 million Washlet electric toilet seats sold, but they’re also available from manufacturers like Brondell (Swash), Bio Bidet, American Standard and Kohler. Basic models without heated water and air dryers are available for under $75, but Toto’s new top-of-the line Neorest 750H will set you back $10,200. At least you’ll save on toilet paper.

“Smart toilets are not only for the wealthy. Spa bathrooms featuring luxury fixtures that enhance personal cleanliness and relaxation are increasing in popularity across the country,” L’Henaff said. “Today’s smart toilets change the daily ritual of going to the bathroom into an opportunity for pampering and rejuvenation, and that experience is something that many homeowners at many income levels are choosing to invest in.”

It’s hard to explain a high-tech electric toilet to someone who’s never used one.

“When you have a chance to test-drive it, it’s a product you want in your life. It’s a better, healthier, more dynamic experience,” said Bill Strang, president of operations and eCommerce, Toto USA.

These tech-centric toilet seats wash from the back (and for the ladies the front, too) with temperature-controlled water that doesn’t just rise you clean. It oscillates. It pulsates. It’s an experience.

There’s a growing trend of high-tech toilets in hotels, where companies can brand themselves as having something different. They appeal to millennials “who are all about experience,” Strang said. The better models also include cleaning technologies, which means whoever cleans the toilet will be doing it less often.

An electronic toilet seat will slightly increase your electric bill depending on the model by about $50 to $65 annually, according to the companies, but look at the big picture. Americans use 36.5 million rolls of toilet paper annually, and a huge amount of natural resources go into production and transportation of toilet paper. Bathroom bidets can save up to 15 million trees, according to Justin Thomas, editor of the website metaefficient.com.

“They drastically reduce the use of toilet paper – the production of which uses tons of natural resources. … While it may not directly lower your monthly utility usage, you’ll spend less money on toilet paper and help to save a lot of valuable resources in the process,” said Jon Pinson, spokesman for Brondell, maker of Swash bidet toilet seats.

Electric toilets are actually an American invention, developed by Arnold Cohen of Brooklyn, New York, in 1964 with the American Bidet Co. With Americans squeamish about discussing personal hygiene and an uncertainty with the oh-so-French bidet, Cohen found it difficult to advertise. The Japanese loved the electric bidet, though, and he licensed the product to Toto. Later, his patent expired.

Today, more than 70 percent of Japanese households have a Toto Washlet; more homes than own microwave ovens, according to the company. Electric toilets are most popular in Asia but also sell in the Middle East and South America, with fewer amenities.

You’re more likely to see one in Europe than in America, but things are changing. In the United States, they’re becoming more common on the east and west coasts and other big urban markets like Chicago, Strang said.

Electronic bidets are also gaining ground with certain segments of the population, Strang said. For women who have recently given birth, the warm-water action rinses and cleans but also relieves soreness or pain. For people with mobility or dexterity issues such as aging baby boomers, “they are an enabling technology,” Strang said.

Contact us at https://esodecorativeplumbing.com for any questions about high tech toilets